of the Three Distant Shores.

All characters belong to one of these six folk. Formed in the broken image of the dead gods above—like all who came before—the six folk of the Three Distant Shores are those whose day it now is to stand in the sun. Dusk, however, approaches—sooner for some, soon enough for all. 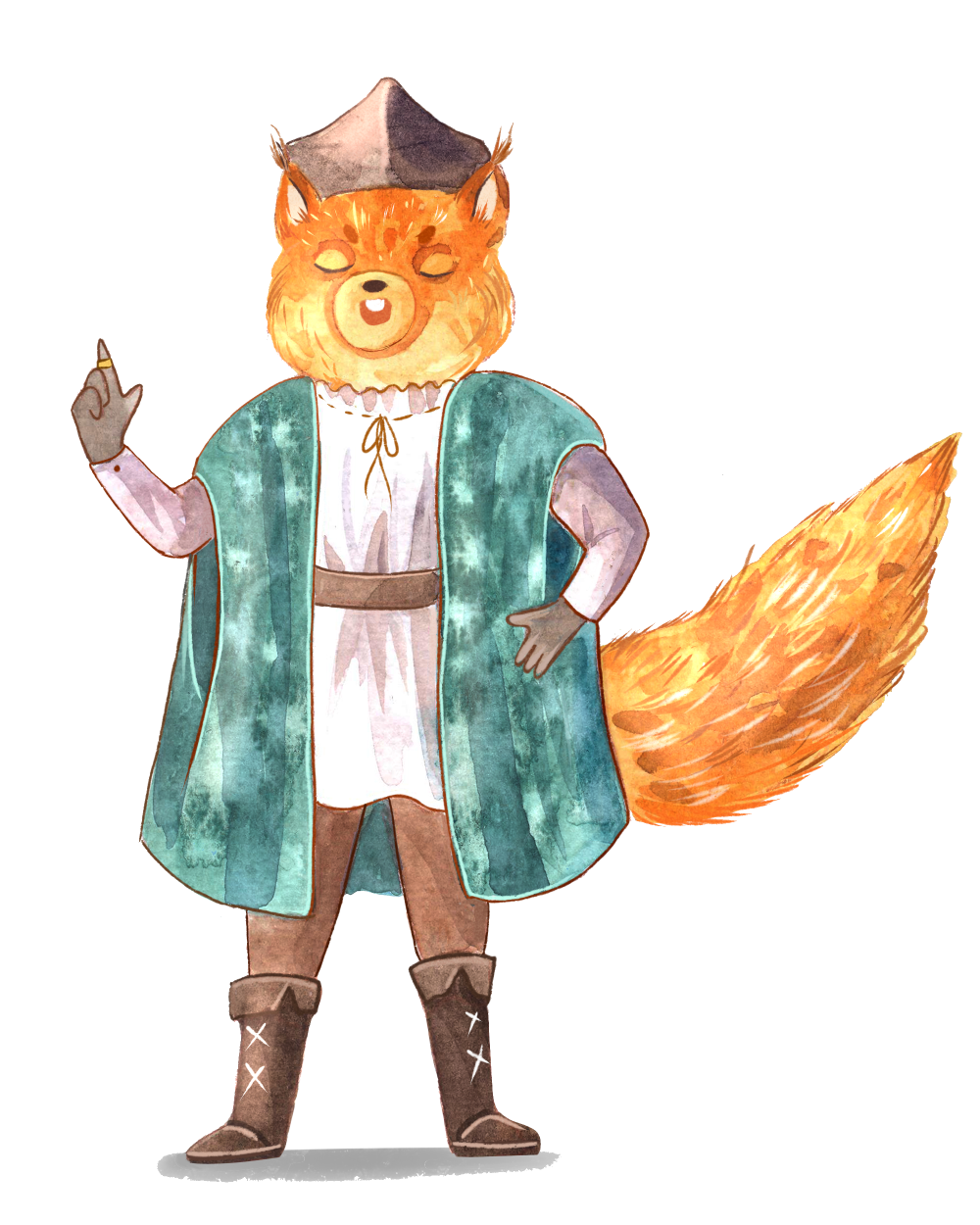 Originally hailing from the Eastern Woods, the eekhorn are the descendants of an ancient tree-dwelling folk. They possess large, bushy tails and a good sense of balance, making them naturally adept at climbing.

There are few eekhorn in the Karst Archipelago because few of its settlements were founded by their kind. Those who do call the archipelago home are found mostly in the nautical trade, as their innate balance and aptitude for climbing make them natural sailors. Because of this, the eekhorn are scattered about the ships and ports of the archipelago, with their community’s heart being at Eektorp Bay, a bustling and dirty port of call.

The eekhorn have a reputation for being quick to act and even quicker to react. At its best, this trait manifests as decisive, bold, and adaptive leadership. More negatively, it can be expressed as an impulsive, unfocused, and unreliable temperament. Because the climate of the archipelago is warmer than most eekhorn prefer, many shear tattoo-like patterns into their fur as a stylish method of keeping cool. 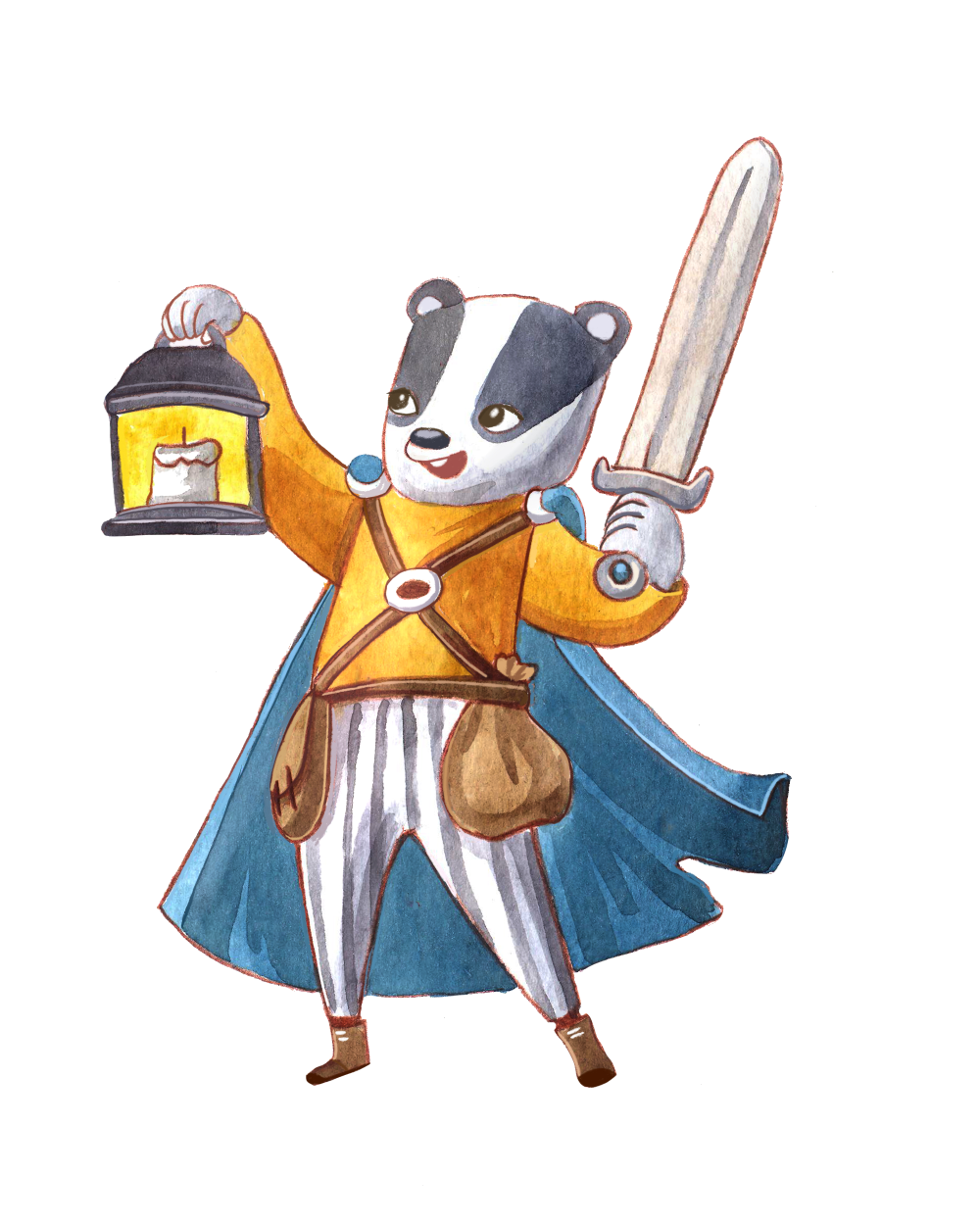 Stoic, clannish, and skeptical, the grevlings inhabited the Eastern Woods from time immemorial—once in fear, and later as the region’s masters. The history and identity of this proud folk revolves around the campaigns they waged to eradicate the vulfs and civilize the woods. True, the eekhorn helped, but it was the indomitable spirit of the grevlings that led the way and kept hope alive in the darkest winters of war.

Like the eekhorn, few grevlings reside in the archipelago, and for similar reasons; the folk of the Eastern Woods discovered the archipelago after those from the south and west. Besides, the climate was a bit warm for their tastes. Still, most every town has at least one grevling—if not a small community—often at the center of things, a role many of their kind reluctantly find themselves in.

Grevlings have a hard time giving up, backing down, or succumbing to death. They are built of heavier bones than the other folk, and their dense coat protects them equally from the heat of the sun and the cold of winter. They have short, slick fur with a distinctive black-and-white pattern and typically dress in the traditional clothes of the Eastern Woods, no matter the weather. Their woven garb has ample pockets and is comfortable enough—to those with a thick layer of fur. 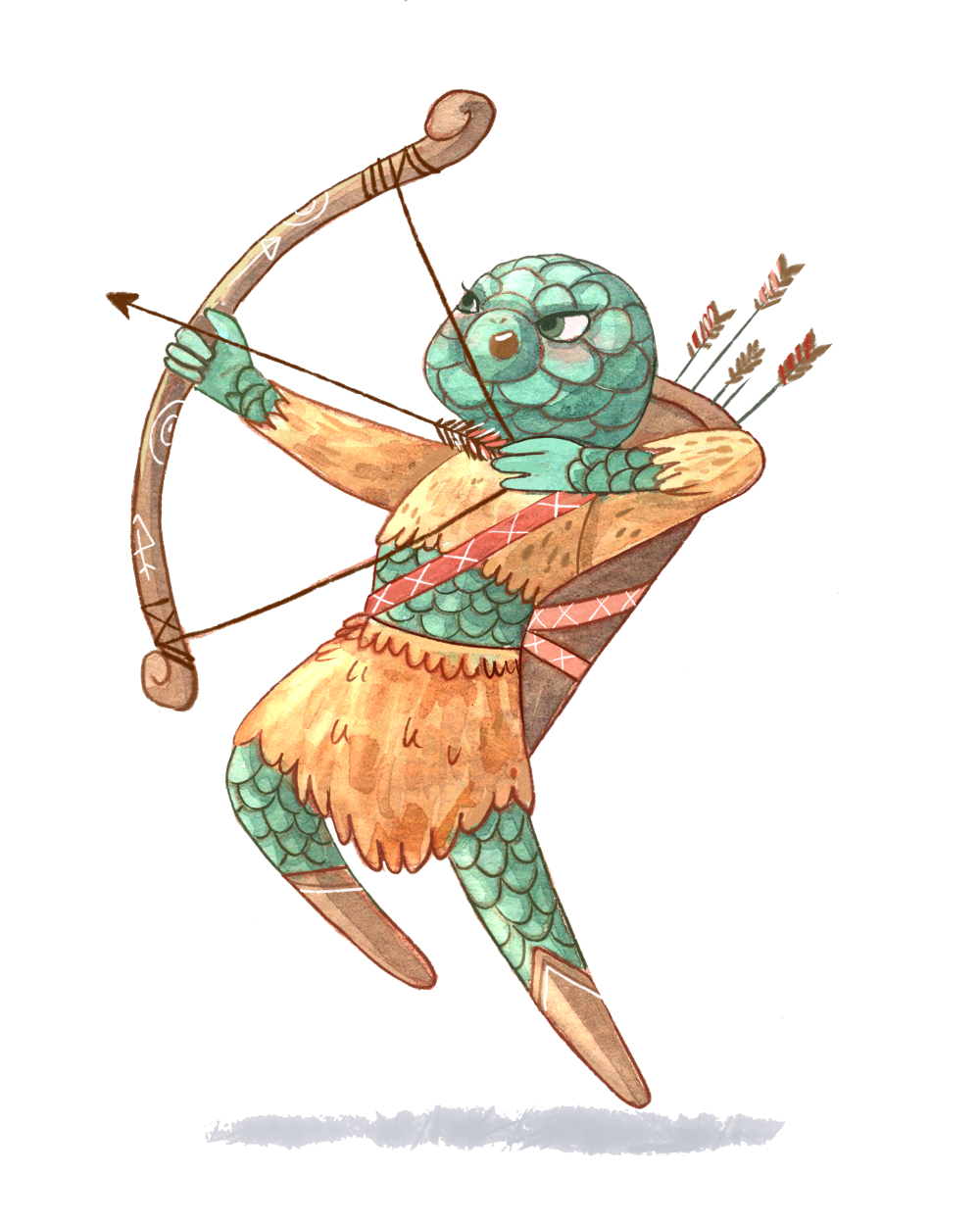 Native to the shores of the Southern Swamps, these folk were the first modern inhabitants of the archipelago. Those who left the swamps and resettled in the archipelago were separatists from the floating cities, a society the lagartos created in partnership with the visita. At the heart of their dispute was the separatists’ belief that spiritual guidance should take a lead role in governance—an idea that the visita nobles would have none of. The independent and spiritual bent of these first settlers set the tone for all future migrants, lending the folk of the archipelago a reputation for self-reliance and superstition. Many island communities can still trace their heritage back to the early lagartos, a point of pride for some of the oldest villages and ports of call.

Standing no taller than the shoulders of most other folk, the spritely lagartos move with a nervous and unsettling haste. Lagartos are born problem solvers, with a fondness for unconventional solutions—and the occasional blind spot for unintended consequences. Geniuses or troublemakers, lagartos have often been regarded as both, and often in the same breath. An industrious bunch, these reptilian folk work with the same hasty energy that permeates their other activities. It is no exaggeration to say that life in the archipelago would fall apart if every lagartos were to take the same day off.

The warm climate of the Karst Archipelago suits this cold-blooded folk almost perfectly. Here, the lagartos are able to dress as they please, with little concern for the effects of cold weather. Some wear sweeping robe-like clothes inspired by serpos and visita fashions, but most prefer close-cut outfits that are less likely to get snagged or otherwise hinder their movement. 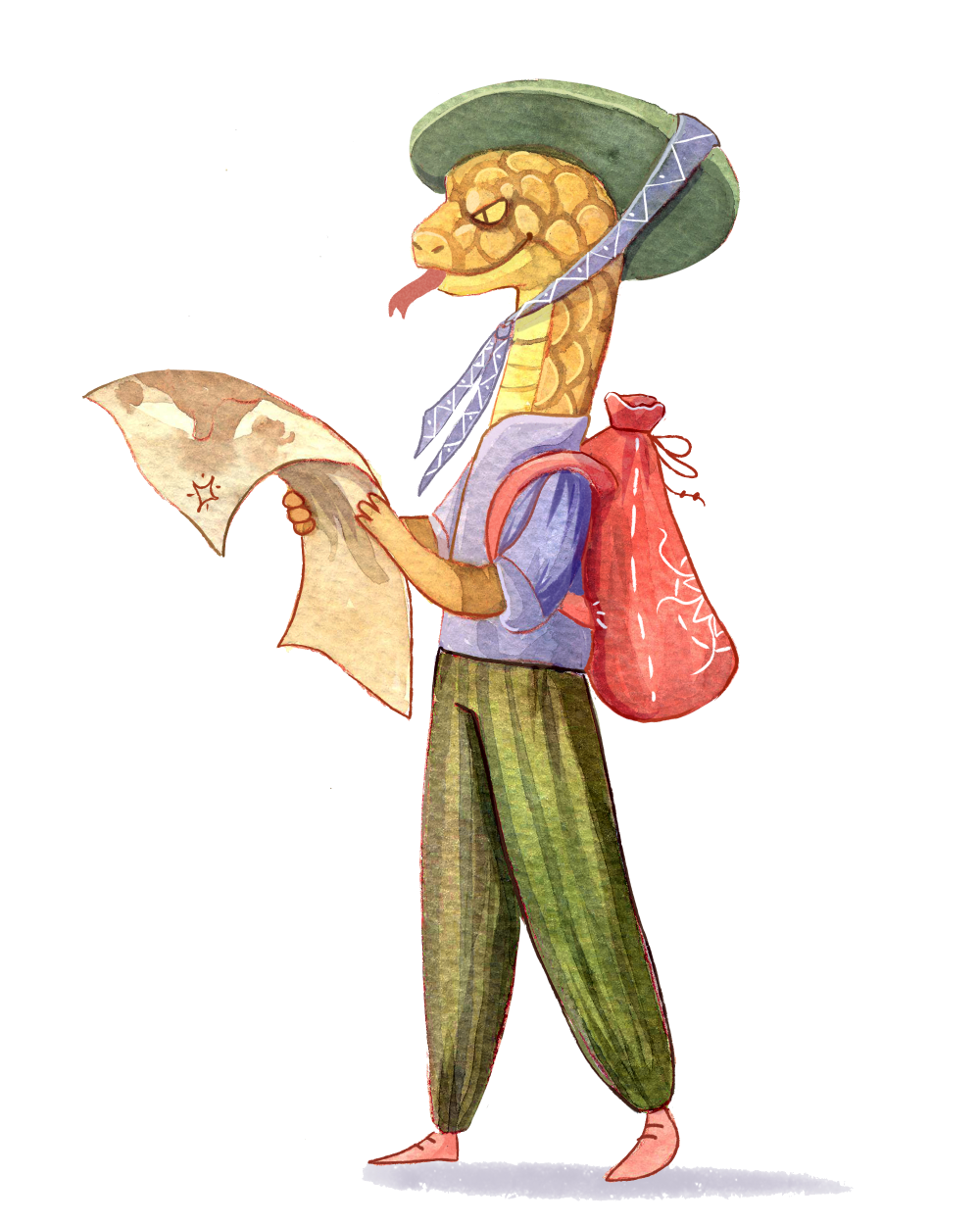 Long has the gaze of the serpos graced this world. From the Western Sands, their empire arose, built atop the thaumaturgic arts—a gift taught to the serpos by the wind itself—as well as the backs of others. These serpentine folk ruled the desert sands for millennia, subjugating their fellow inhabitants, the veldlings. Like the desert sun, harsh and unrelenting was their rule. Under the lead of the serpos—watered by the blood of the veldlings—the empire grew to dizzying heights.

But all things pass, and so the fortunes of the First Serpos Empire eventually waned. After centuries of corruption and internal turmoil, serpos society collapsed when the veldlings rebelled and then fled, removing the empire’s chief source of labor. Within a decade, a millennia of so-called progress came crashing down, the serpos empire reduced to a collection of warring tribes and sects.

The serpos are a learned folk and have become much wiser for these past transgressions. In the shadows of their failed empire, they have rebuilt and reimagined their culture and beliefs. But memories are long, and grudges are held even longer. To this day, many folk still do not trust the serpos at face value, a lamentable—but understandable—stance.

While individual serpos are something of a rarity in the present-day archipelago, many islands are home to the ruins of ancient outposts from the dawn of their empire. The few serpos who can be found in the archipelago are a varied lot—merchants, scholars, bakers, and laborers—but all possess a peculiar understanding, one that either humbles them or instills a strange and ancient arrogance. 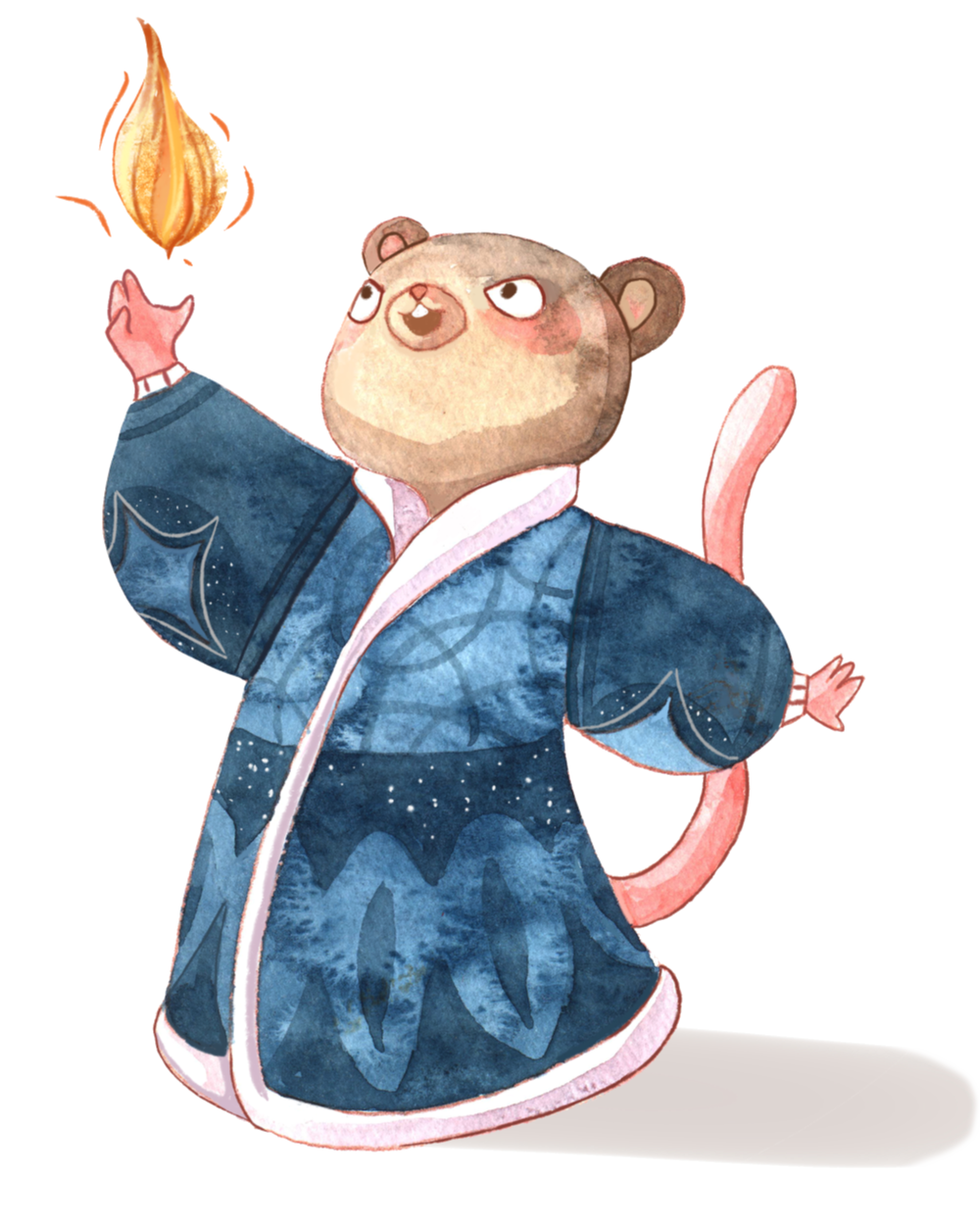 Born of the Western Sands, the veldlings—or velda, as they were once known—fled their homelands five hundred years ago, following a long period of oppression at the hands of the serpos. Fleeing across the Mirror Sea, many of these short-furred folk resettled in the Eastern Woods alongside the grevlings and eekhorn. But as the archipelago stood at a midpoint in their journey to the east, some veldlings chose to make Karst their new home. Here, on sparsely populated islands, they found respite and a place to settle. Some five centuries later, they remain a large part of the archipelago’s population.

Veldlings are brave—but measured—folk. They know that discretion is often the better part of valor, a trait that makes for fine adventurers. As careful as they are, they are equally—if not more so—ambitious. A sociable lot, most veldlings enjoy the situations that arise from interpersonal interactions, good and bad. Taken together, these aspects of their psyche help explain why many traveling merchants, ship captains, and shopkeepers are members of this entrepreneurial folk.

As one of the two most common folk in the archipelago, veldlings are found on almost every inhabited island. Aspects of their culture, from their native tongue and shipbuilding techniques to their propensity for hilltop shrines, have become foundational parts of life in the Karst Archipelago—the name itself of veldling origin. 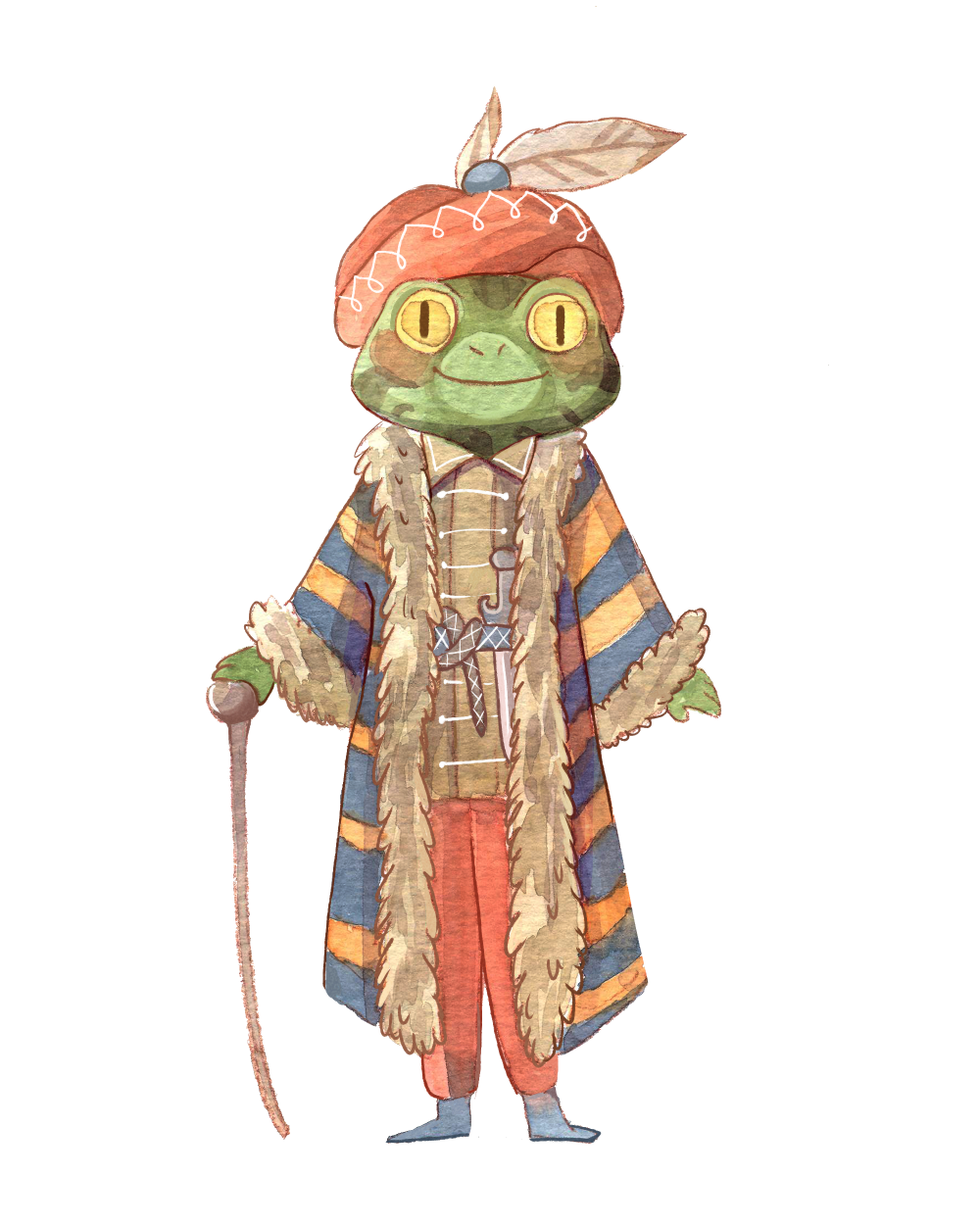 The visita were born in the waters of the Southern Swamps. There was abundance in the swamps, but the waters were murky. And thus, just as a visita grows from egg to tadpole to fully fledged frog, so have the visita grown as a folk: first by leaving the waters of the swamps and constructing vast floating cities beside their banks, and then by leaving the swamps entirely and exploring the seas and continents—forming mercantile bonds and trading with the folk around them.

The visita have never really had it hard. There were no vulfs to fear or rival species to hate; the waters of the Southern Swamps provided a home and a steady source of food; the floating cities were created from surplus, rather than constructed in defense; and even more, the lagartos did not oppose the visita’s encroachment onto the land but instead saw the opportunity to fill in the margins of their society and share in the abundance.

Of the dead gods above, Woggles, often associated with the visita, embraced and understood the changing nature of life far more than did her peers—something that is reflected in this folk. There is an order to life and a course to it. Change is inevitable, but it is seasonal, and there are patterns. There are ups and downs, but in the end, things turn out well for the visita because things always turn out well for the visita.

This mindset can be a little problematic. It is difficult for a visita to fully appreciate when the odds are against them, and it is nearly impossible to convince one that they are wrong or to dissuade them from a course are have set upon. A visita will genuinely listen to and take the advice of their subjects, companions, and compatriots, but it can be a little tricky for one to give up the reins of power—except to someone of a clearly higher station.